Here’s something that’s been bugging me. Nerds all over, got super super upset when Superman killed Zod at the end of Man of Still No Colours. “Superman is super good, he never kills!” everyone said. I’m not here to make fun of that sentiment. I agree, superheroes shouldn’t kill. From everything I read, it seems like it was part of Snyder’s agenda to make the point that sometimes good guys have to kill, or something. And that’s bad. I mean, he could have had superman find a way to incapacitate him or whatever. But no, he wanted to show that sometimes good guys have to kill. For once I agree with the legion of angry fans. It was useless and pointless and completely against what the character and, you know, morality, stands for.

But here’s what’s bugging me: in Avengers 2: The Clusterfuck Setup For Sequels, pretty much exactly the same scene happened, only, like, a thousand times more disturbing. And although that film does mark the moment when we went from “holy shit, Marvel can do no wrong apart from Iron Man 2 and Hulk” to “holy shit, Marvel can make mediocre films that aren’t Iron Man 2 and Hulk” the bones of our complaints weren’t with the final scene. But it shouldn’t have been.

Quick question. Am I describing Superman or Avengers here? After a climactic battle which has taken enormous toll in terms of lives and property destruction, two beings – alien and superior to anything on the planet – battle and one of them ends up killing the other in cold blood for the good of everyone else. If you said “both” well, done, you read the sentence at the beginning of the paragraph.

I’m of course talking about the scene where Vision uses his vision-magic to take Ultron apart. The scene is remarkably similar to the climax of Man of Still Here I Guess, except that instead of being in the middle of killing some bystanders, Ultron is in the middle of harming literally nobody. Vision makes the calculation that the world is better off without Ultron, and kills him.

Seriously, watch these scenes back to back.

At least Superman has the grace to be upset. I would argue that Age of Ultron is even more disturbing than Still, because it’s not a spur of the moment, thing, it’s a calculated, rational, cold-blooded killing of a desperate being begging for its life. Why did we all, and really, I mean you all, get suuper upset when Snyder did this but mostly shrugged when Whedon did it?

Well, I’ve got a couple of theories, and handily they also function as rebuttals to any counterarguments against my argument. The first is that it’s OK, because Ultron is just a robot. He’s not a person, so killing him isn’t wrong. Except he’s not just a robot. The film goes to great length to establish that it’s a fully conscious artificial intelligence. So what if he he doesn’t have an organic body? He’s intelligent, he has emotions, he feels pains. Just because he’s not human doesn’t make it OK to kill him.

Well, maybe you could argue that it’s ok to kill him because he was evil and he was going to destroy all life. And here you have a point, except so was Zod. Either it was ok to kill Zod or it was not ok to kill Ultron. You really can’t have it both ways.

But you can argue that the hypocrisy is OK, because Superman has a legacy and that is he doesn’t kill. That legacy has been built up over decades. So, it’s OK for Vision to kill, but not Superman. But here’s the thing. Vision pretty much is Superman. Ok, he’s not, but he is. They don’t look the same, but their powers, and their power levels are pretty much the same, and forget what I said at the beginning of this sentence, they do kind of look similar, if you ignore the fact that one of them is red. 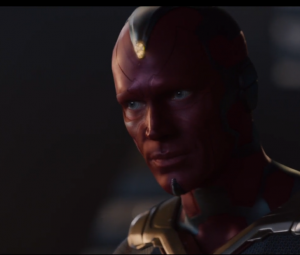 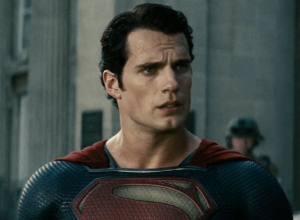 And remember, the film goes out of its way to suggest that Vision is the closest thing to a perfectly benevolent being. I mean, he’s the only one apart from Thor who can pick up Mjölnir (and, I mean, really? Thor? He’s a perfectly worthy being? What criterion is the hammer going off anyway?). So, although he’s not actually superman, the film gives him pretty much all the signifiers of Superman.

So, here’s the thing that really bugs me, apart from the hypocrisy. I wasn’t that fond of either Man of Still Going To Keep Doing This Stupid Gimmick, or Avengers 2, and I found the ending to both a little disturbing. What’s going on is that the filmmakers are trying to set up an interesting moral dilemma. If someone is all powerful, evil, and threatening to kill everyone, is it OK to kill them first? Both films fall squarely in the affirmative. Yes, they say. If an evil, all powerful being wants to kill everyone, not only is it ok to kill them first, it’s your responsibility. The problem is, the question is based on false premises. In the real world, we don’t have inherently evil people who will kill everybody if left unchecked and even if we did, telling them apart from normal people who have gone astray and can be helped is nearly impossible.

This matters, because the worldview espoused in these films is inherently conservative, and borderline fascistic. The view that some people are incurably evil and need to be put down has strong implications for how we view the justice system. It leads to things like the mass incarceration they’re seeing in the States and, taken to it’s logical conclusion, fascism. Obviously Man of Still just a stupid movie, isn’t going to lead to concentration camps, but it does promote the kind of simplistic thinking that leads us to make unproductive changes to our justice system. And that’s not cool.

Huh, wow, this was maybe a stronger point than I intended it to be. Oh well.

Correction: an earlier version of this post had the same paragraph twice. Thanks to Michael Gardner for pointing this out me look like a fool in process. I mean, no one would have noticed, but now everyone knows and I look like a fool. Thanks, Michael.